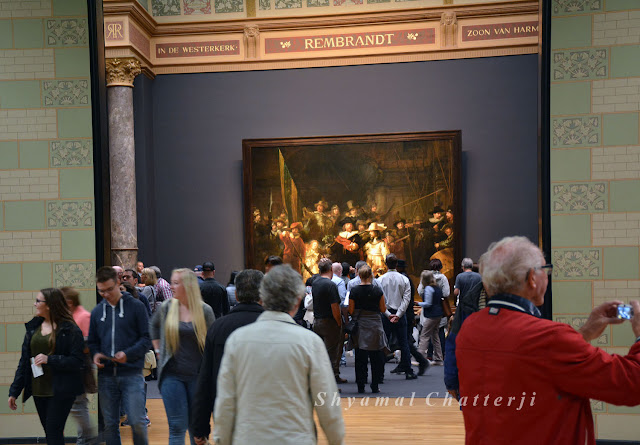 Visitors' movement in the hall where 'Night Watch' is displayed.

When we planned to visit  families in Helsinki and Houston in 2017, I  selected Amsterdam as the Airport to disembark in Europe not only for its connectivity, but also for a visit to  Rijks and Van Gogh Museums as well as a boat-ride in its canals. 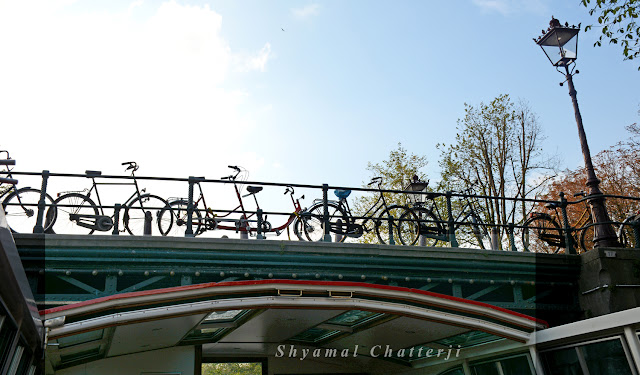 View of a bridge across a canal :
Photo taken during our boat-ride in Amsterdam.

Rijks Museum allows photography without flash, hence we could bring camera-load of memories . This time, I decided that I shall take snaps of parts the large paintings displayed  so that I can study the details later on a computer screen.  To get an opportunity to click a straight  photo , without watchers' heads obstructing the view, was never easy. Not having enough elbow-room, in some cases, caused framing of  selected portions improper. 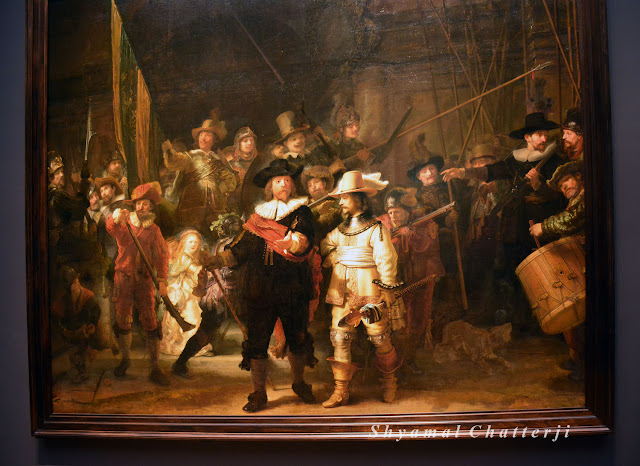 The full picture from as close a position as possible.
The lighting very aesthetically accentuates the painter's highlighting.


'Night Watch' was painted in 1642 AD by Rembrandt . The painting  was commissioned by  the Klovenier company under the command of  Frans Banning Cocq and used to be displayed at Kloveniersdoelen [ ' musketeers' shooting range' ] till 1715 AD. In 1715 AD, it was shifted to the Amsterdam Town Hall when its all four sides were trimmed. Its current size is 11.91 ft X 14.34 ft . 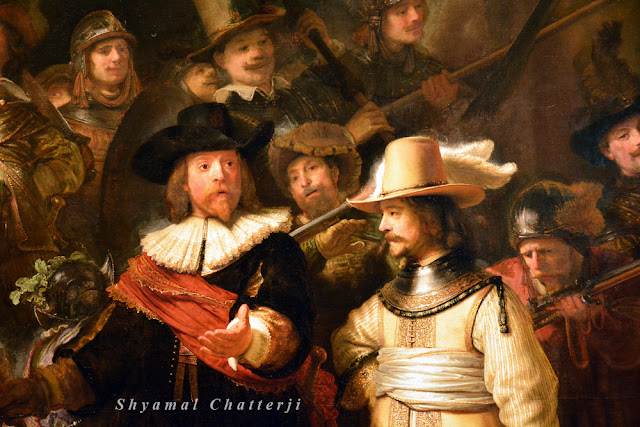 Captain Frans Banning Cocq , dressed in black, with a red sash, and his lieutenant
Willem van Ruytenburch, dressed in yellow, with a white sash.

Rembrandt's painting stand out for two reasons : perception of movement of the group and effective use of light & shade. it is stated that   for quite a long time, the painting had a coat of dark varnish, giving a wrong impression  that Rembrandt painted a night scene, hence the name 'The Night Watch'. 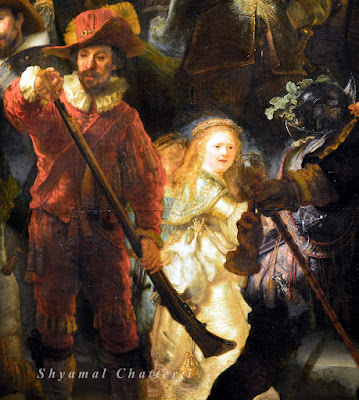 Who is the 'mystery' girl in this painting ?

There are paragraphs written about the mystery girl in this painting, highlighted by sunlight and shade. She holds a dead chicken in her hand, representing a defeated adversary. Does she have any resemblance with Rembrandt's wife whom he lost before he started the painting ?  There are more symbols associated with her depiction. Interested reader may pl refer to :  https://en.wikipedia.org/wiki/The_Night_Watch.

LET US STAY CONNECTED
I am now in the 'harvest' phase of my life. Brown leaves of autumn, awash with the light of afternoon sun.